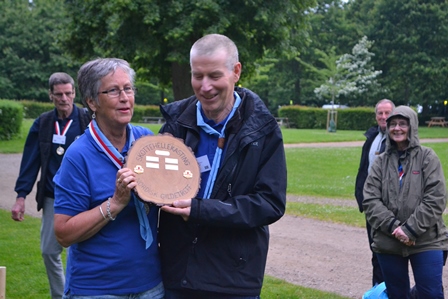 It was back in 1955 that 18 countries gathered here in the ancient Bygholm manor in Horsens, Denmark, for the first IFOFSAG (now ISGF) World Conference. The hotel Scandic Bygholm Park, is a lovely refurbished manor house centrally located in Horsens, Denmark and surrounded by a beautiful park. The 28th Nordic Baltic Gathering also took place in this hotel from 25 – 30 June 2015. The 79 participants came from Denmark, Finland, Greece, Iceland, Netherlands, Norway and Sweden.

Peter Sørensen, the Mayor of Horsens, opened the Gathering. Later in the day the participants gathered in the park and they played and watched a very old Nordic game called: Skothellekastning. The team from Sweden was the winner.
The theme Traditional practice or True to Tradition was used by two keynote speakers. The first one was Mette Bock, member of the Danish Parliament. She spoke about Danish folk traditions, while the second speaker Mads Rykind-Eriksen, head of the Folk High School in Rødding urged to give young people the tools to develop and learn about their culture.
Bjorg Walstad, chairman of the ISGF International Ambassadors Guild (IAG), invited participants to become an Ambassador and at the end of the Gathering she could welcome 13 new members.
A prison museum was visited. From 1853 to 2006 the city housed the Horsens State prison, which held prisoners serving longer sentences. It was closed in 2006 and now it is a prison museum. At that same evening a campfire was held. The ash from the campfire from the World Scout Jamboree in Ermelunden, Denmark 1924 was added to the fire.
There was an excursion to Jelling, an old and important historical town in the history of Denmark. In the Viking Age it served as the royal seat of the first Monarchs of the Kingdom of Denmark. Jelling is the site of a large stone ship and two large burial mounds, the Jelling stones and Jelling Church which are an UNESCO World Heritage Site since 1994.
Also the former Vejlefjord Sanatorium was visited which is now a hotel surrounded with a wellness centre and a fantastic nature – 43 hectares of park, forest and beach. Here Runar Bakke, ISGF World Committee member, explained the participants about the development and situation of ISGF.
Another day the participants had to climb Denmark’s highest hill (147 meter) called Himmelbjerget near the town of Silkeborg, from where they first had to embark a boat, which brought them to the foot of the hill.
An official meeting of the Danish Fellowship was held (Guild Hall) in the hotel and after that there was entertainment by “the Skive Singers”. A group of five Fellowship members entertained us by singing. Also historic ISGF facts and a motivational speech about You and Me were brought up (see below). The Gathering was closed and the 29th Nordic Baltic Gathering will be in 2018 in Gothenburg, Sweden.
Click here to see the photo gallery