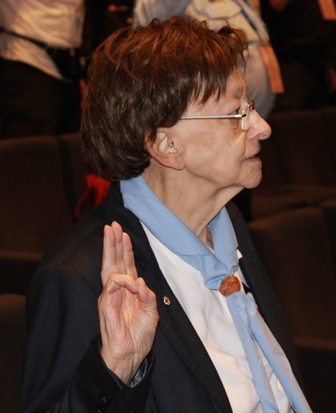 Yes Anne, you were my sister, my little sister.
Physically we were similar; we were very often taken for each other. You were my sister; you know the one with whom one exchanges everything, much more than with a biological sister. You did not speak much about yourself, but you opened your heart so often to me. I thank you for the confidence you have given me.

In 2001, I was making my very first steps at ISGF; I have the vague memory of having met you in Budapest in Hungary at the European Conference; I was overwhelmed by the many participants and I was trying to take my marks.

It was in 2002, at the World Conference in Vancouver, Canada, that we discovered ourselves. I believe that what has been the magnet of our meeting is that both of us were belonging to pluralist scout associations; you in Belgium, me in France. You were really, and you did not hide it, very anticlerical. I have been fascinated throughout our years by your passion for scouting and guiding; you gave the impression of living only by and for them. A few years ago you took me to Gilwell; there was a camp; I do not remember the frame anymore; but you knew everybody, all the English who were there. It was incredible. You were appreciated by all. And I'm not talking about your passionate involvement in the Ambassadors' Guild.

2004: European Conference in Canterbury, UK; I still see us discussing on a bench in the courtyard of the University; this is when we began to redo our world, ISGF; we often agreed on many subjects.
It was also in Canterbury that, after a consultation, I said that I was ready to run for the Presidency of the World Committee; you were happy and you supported me; it gave me good; And it was because of our complicity that I suggested that you present yourself to the World Committee.

2005: World conference in Lillehammer, Norway; We were elected, you to the World Committee and I to the Presidency. Three years work together.
In three years, our phone bills have exploded! Fortunately the meetings in Brussels allowed us to continue our discussions. It was during these visits that I discovered your taste for good meals with good wines. You made me discover many good restaurants in Brussels. I will miss these one-to-one conversations.

2007: The Scout and Guide Spirit Flame goes through Belgium. You had come to Paris and to Moissons for the various ceremonies; and you recovered the Flame at Péruwelz - we laughed so much when you took me back because I was unable to pronounce that name correctly! And we both carried it together across Belgium ... I handed you the wheel of one of the Toyota Prius decorated with the logo of the Flame; I no longer know the names of the cities; but I remember the Giants, particularly that of Baden-Powell; I remember a magnificent campfire near Brussels ... the picture is still in my room!
And in Brussels! the delirium ; The Grand Place filled with people, the Giant of Baden Powell is there in master of ceremonies, the Manneken Pis is in scout uniform, the reception at the City Hall is sumptuous; and icing on the cake, we went together in the Toyota that you were driving escorted by 4 gendarmerie bikers; we had an appointment with the European Commission.
Little mouse you had organized everything with your Belgian friends. It was amazing. ISGF for a while became more than visible.

2008, ... I skip a few steps ... World Conference Vienna, Austria; Brett replaces me as Chair of the World Committee and you become Vice-Chair. And for years afterwards we have done ISGF again! Even until the European Conference of Tours in France in 2016!

The "Scout serves Friendship among men"; you have been very interested in humanitarian actions; the one with the United Nations High Commissioner for Refugees. UNHCR; with which ISGF had signed a partnership agreement in 2007.
In 2008 you came to Paris to the meeting organized by the French representation of UNHCR as part of World Refugee Day. Refugee women. Out of this came the project of donation of school supplies to children of Burundi.
You have been very interested in this project; you remember the European Conference of Cyprus in 2010? We had been convincing enough to raise more than 500 euros. You wanted to come with me to Burundi in December 2010 but your schedule had prevented you. You have always regretted as the action had been successful.

One day you phoned me to tell me that you had just been in contact with an association of international civil servants who fund small actions in Africa. Thanks to your interest in my activities in Côte d'Ivoire, you helped me to set up a project that was financed by this association. Ivorian villagers have been trained in the manufacture of attiéké, cassava semolina, of very good quality; they are still living in their trade.

Tours, France, September 2016; You absolutely wanted to come to this European conference; You were not well again and two of your friends brought you; should they be warmly thanked; this is the last big ISGF meeting you attended. You fought hard to be there. Thank you. A small burst of forces brought you to Budapest last November; was it too much?
We are sad that you are gone. You could no longer bear being thus diminished, and perhaps it is better so; you have found your parents, your brother.

Good bye, Anne for ever.