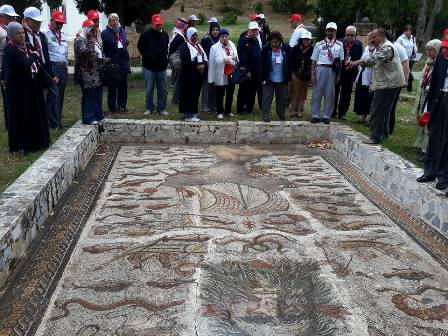 The 3rd Fellowship Gathering in Tunisia was organized as planned from 14 to 21 May 2015 in Tunis, Bizerte and Tabarka, with the participation of 85 adult scouts and guides from various regions of Tunisia (33), as well as from other countries such as Saudi Arabia, Jordan, Lebanon, Libya, Morocco and Australia attended and the participation of Mida Rodrigues, Chair of the ISGF World Committee.

Following the programme for the event, the participants had the opportunity of visiting the following sites: The Bardo National Museum; The headquarters of the Chamber of Deputies (Parliament); The Government;, The medina of Tunis; the souks and the Zitouna Mosque; The northern suburbs of Tunis including Carthage and Sidi Bou Said; The archaeological sites of Utica and Bulla Regia; The cities of Bizerte, Tabarka and Ain Draham; The Spa of Hammam Bourguiba; The village of Beni Mtir (donations of books to the College Library).
The participants in the gathering held a seminar on the history and the current state of the Adult Scout and Guide movement at international, national and regional levels.
They were also able to admire the natural beauty spots of north-west Tunisia, spend enjoyable moments in good company, taste Tunisian cuisine in its diversity and attend friendly scout and guide evenings, including a camp fire. The farewell evening was mostly devoted to the exchanges of gifts and souvenirs.

Photo 1: The central hall houses a rectangular pool paved with a mosaic representing several species of fish and which emerge two marble pillars supporting a cauldron at the archaeological site of Utica