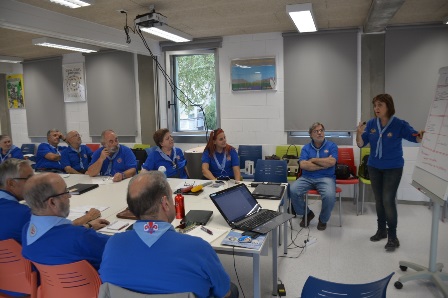 On 4th October 2015 it was the first time that all presidents from the 17 component associations of Amistad Internacional Scout y Guía Adultos AISG España gathered together for their first meeting. The meeting was held in a new headquarters given to NSGF Spain by the Scout Association of Madrid in which they will be able to hold meetings, assemblies and activities.

In addition, NSGF Spain has a new accommodation in the new Scout hostel that will allow them to come to Madrid with limited cost, in the line with their principles, but at the same time dignified and comfortable.
The discussion had some topics like to where they want to lead their Federation, what they are doing well, what they can do better, what kind of difficulties they found and moreover the new web page of NSGF Spain.
In the evening, they were guided around the Madrid in an original tour to the heights of some landmark buildings, from where they could admire the interplay of light, shadows and moving life of this city, especially on a Saturday.

Paying attention to the reality in which they live, they reflected on the next international situation: the refugee’s issue, and what they can do as adult Scouts, from their spirit to build a better world. They put their first bricks to start a project, each one in their environment, collaborating with entities that know how to help them; and because there are not lines of action yet, from NSGF Spain, in collaboration with all the adults Scouts, they will be giving shape to their contribution.
As an appetizer, a whatsapp AISG Solidarity Group has been created, in which their experiences and contributions are published.
At the end of the meeting, they made a cultural visit to some jewels of Madrid, hardly known, even to the locals, such as the cemetery (Memorial) of the fallen of Dos de Mayo (02 May) in remembrance of their defeat over Napoleon's invasion in the 1800s; the bridge of the Princess, and specially, the hermitage of San Antonio de Florida, with one of the top works of the painter Francisco de Goya.
As a goodbye for the meeting a meal was held in Casa Mingo, one of the oldest restaurants in Madrid since it opened in 1888. At a reasonable cost they eat very well and, as Asturian “chigre”, they drink good natural cider.

# Chairman ISGF World Committee — Mida Rodrigues 2015-11-15 23:37
It was a very good idea to meet only Presidents, because many people don't know the Spanish reality. I'm sure the Component Associations will function now in a much better way an all with the same knowledge. Fuerza España
Reply
Refresh comments list
RSS feed for comments to this post
Add comment
JComments
FaLang translation system by Faboba