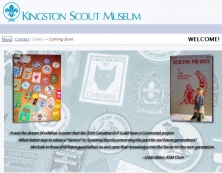 The Kingston (Ontario, Canada) Scout Museum will be officially opened on Sunday, February 17th with a Ribbon-Cutting Ceremony and a Dedication at 2 PM.

The museum, small by all standards, is a creation supported and partially financed by the 35th Canadian B-P Guild (Limestone). The transformation from an unused back room previously used as a Scout Supply Shop, has taken almost six months.

The committee of twelve and occaisional others helped clean the space; remove the surplus items; painted the room; decorated it and created numerous displays - one being a campfire setting; another has a number of artworks by and of our Founder Lord Baden-Powell.

There are other displays of::

Our website: http://www.kingstonscoutmuseum.ca/ is in its infancy stage and will develop as we have time to download photos and other information.

This posting is to keep the rest of the ISGF members apprised of this Centennial Project by the 35th Canadian B-P Guild.