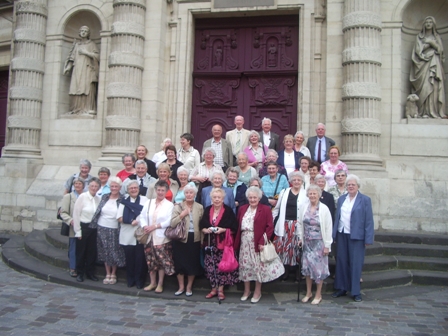 "The Fédération des Associations d'Anciens et d'Adultes du Scoutisme français (FAAS), the National Scout and Guide Fellowship of France, were informed some months ago that a group of UK Trefoil Guild (UK TG) were going to come to Paris for a short stay at the beginning of June, their travel being organised by a British travel agency.

Anxious to welcome their friends coming from all over the United Kingdom in an appropriate way, some Parisian members of FAAS had decided to rally.

And that is how the UK TG were welcomed at the train station or in their hotel; they also were accompanied by French people in their visits.

The trip on the Seine was wonderful; the banks of the Seine and the magnificent monuments or old buildings which are all along as well as the vision of the Eiffel tower sparkling brilliantly impressed our British friends very much.

Before leaving France a dinner in a restaurant had been organised ; very successful and a lot of fun.

But beyond the visits together, the contacts of the UK TG and of the members of FAAS were excellent and allowed participants to know each other better and to better understand the international aspect of ISGF.