Audience at the Ministry of Foreign Affairs of Benin 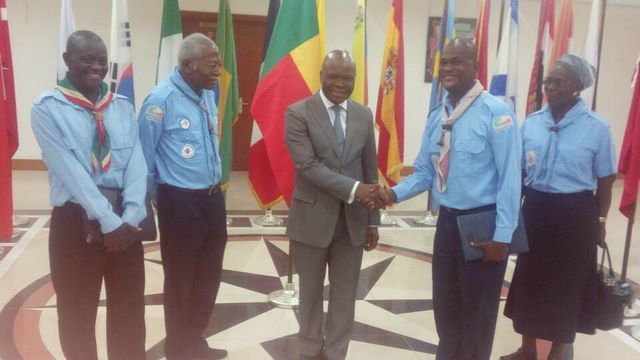 Thursday, January 4, 2018, the Minister of Foreign Affairs of Benin, Mr. Aurelien Agbenonci received in audience a delegation of the Association of Adult Scouts and Guides of Benin (ASGAB) led by Mr. Francis Mihami, President of ASGAB.  On the menu of discussions, the sub-regional meeting of the International Scout and Guide Fellowship (ISGF) West African Zone which will take place in Cotonou, Benin from 5 till 9 November 2018.

The President Mihami also made known to the authority that, during the ISGF Africa Region Conference held in Ouagadougou, Burkina Faso, in March 2016, Benin was elected to the post of Secretary General in the person of Chief Babo Pierre Damien. The President also raised the concern of having headquarters to house the permanent secretariat of the Africa region.

Minister Agbenonci congratulated ASGAB for arranging a sub-regional meeting in Benin. He also congratulated Chief Babo on his election to the General Secretariat of the Africa Region Committee. The authority promised to help ASGAB for the success of the November meeting. Thus, the Minister put us in contact with the head of associations and culture of his department. The audience ended with the taking of the souvenir photos.

More gatherings will take place in 2018 in Africa sub-regions: