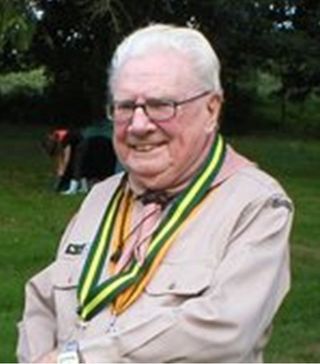 Very recently Derek Elton received the Member of the Order of the British Empire award (MBE) in the United Kingdom for his services to Scouting and the Community in Stourbridge West Midlands. England.

Scout leader Derek Elton has been awarded an MBE at the age of 96 in recognition of his decades of service to Scout groups in Stourbridge. The great-grandfather (96) has been part of the movement since the age of 15 and is still involved four years shy of his 100th birthday.

Mr Elton, from Wollaston, admitted news of his award came as a huge surprise and said he did not expect any more honours after being awarded the Silver Wolf – the highest scouting award – in 2008.  “I am very, very shocked to receive it,” he said. “I am absolutely thrilled to bits, but it came as a huge shock.”

Mr Elton joined the 1st Stourbridge St Thomas group as a teenager and went on to become Cub master. He is less actively involved these days but remains president of the Kinver Scout Camp and vice-president of the West Mercia Scout County. Asked why he has remained active with the Scouts for so long, he replied: “Friendship and helping others, that’s all I can say. Helping to train the youngsters.”