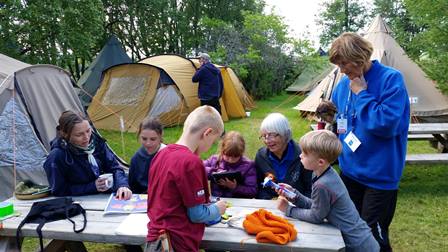 About 30 Guild members from the Norwegian Fellowship participated in the “Nord2017”, the National Scout Jamboree for the Norwegian Scout and Guide Association. The event took place from 1 – 8 July in Bodø, north of Norway above the Arctic Circle.  The Guild members were divided in several teams. One team supported food distribution while another team ran the Hotelt tent hotel for guests. Other teams were busy with the Stamp Bank or the Scout Museum exhibition.

Since 2005, the Norwegian St. Georges Guilds have participated in all Norwegian scout and guide camps with a separate Guild troop, where they have organized a tent hotel project. The purpose of the project, called ”Hotelt”, is to provide visitors to the camp with simple and inexpensive accommodation. The tents, which are modelled after traditional lavvoes (a tee-pee-type tent used by the Saami reindeer herders) are equipped with camping beds and a plastic washbowl, the guest bringing their own sleeping bags. The guests are mostly families with one or more child in one of the camp troops, or old scout and guide leaders who feel that sleeping on the ground is not any more very kind to their backs. 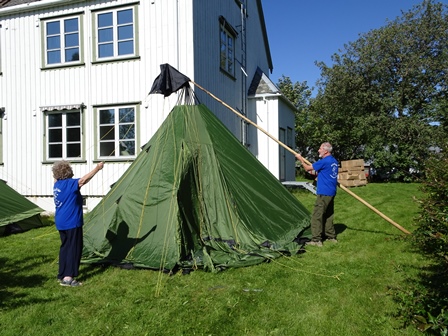 Guests can choose between a bed-and-breakfast version, or a version with all meals, which are usually taken in the camp staff canteen, although a large recreational tent is available in the Hotelt area for coffee, tea and waffles. The large tent (with its free coffee, tea and waffles) is also available to the camp’s scout leaders, offered as a location for rest-and-recreation when the strain of the leaders responsibilities becomes too heavy.
The Hotelt project is run on a low-cost budget: ”Speider-sport”, our largest scouting equipment shop, is an important sponsor, renting out tents and camping beds to us at a very low price – and selling the equipment after the camp to scout and guide troops at a reduced price. The project is run in close co-operation with the camp management, and any profit goes to the camp economy.
Our experience is that the Hotelt concept has become increasingly popular both with the guests and with the scouts and guide organisations. It is also very popular with our guild members because it is a very concrete way of assisting the scouts and guides. It also helps making the guilds more visible; and not to forget: it is great fun! 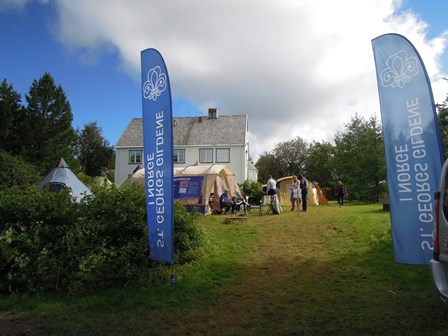 It is worth noting that the idea of an active guild participation at national scout and guide camps is not only a local phenomenon, it is shared by our neighbouring countries. The Finnish Fellowhip last year organized a recreational sub-camp at their national scout and guide camp, including a traditional Finnish sauna and a number of various activities (see the December 2016 isssue of the Nordic-Baltic Sub-regon News Letter for more details). The Danish St. Georges Guilds of Denmark are currently trying out their own version of Hotelt during the National Jamboree.