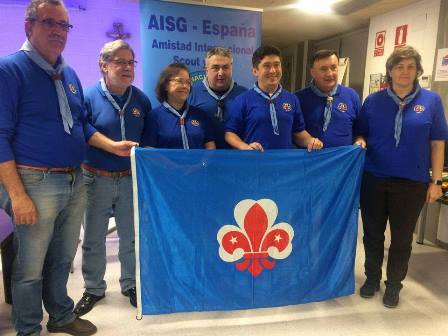 On April 1, 2017, the General Assembly of the Spanish Fellowship met in Madrid. The President of the Spain Scouting Federation, Elias Py Rodríguez, attended the meeting.

At this meeting the new Federal Executive was elected, it was constituted of the following members:

At the end of the Meeting, the “Neckerchief of Honor” was handed over to all the former members of the Federal Executive.

After the ratification by the Federal Assembly, the Agreement for the exploitation of the shop with the Promise Foundation was signed. On behalf the Spanish Fellowship, the document of Agreement was signed by the President Antonio J. Lillo. On behalf the Promise Foundation, it was signed by its President Jesús Ferreiro. The foundation is an initiative of the Scouts of Spain and in the shop you may find some interesting articles see this link.
http://www.latiendascoutdemadrid.com/categoria-producto/scout/uniformes/aisg/

At the end of the Federal Assembly, due to his merits and services to the adult scouting, Fidel Hernández Benjumea was awarded with the “Trebolis” Insignia. Fidel, a highly esteemed person, in both adult and juvenile movements, is a Teacher of BGE (Basic General Education) and Bachelor in Educational Sciences, with an extensive teaching experience since 1983.
In 2007 he obtained a Doctorate in Education Sciences from the University of Madrid (Complutense University; with the PhD work “The contributions of Scouting to the Society of Knowledge”. His curriculum as educator and trainer is very extensive.
Boy Scout since 1972, his record as such it is also extraordinary. In this area, he started very early to distinguish himself due to his organizational, directive and formative attitude. The confidence in the Scout Method of this distinguished Professor has been very important for the improvement of the educational quality of Scouting in Spain in the recent years.