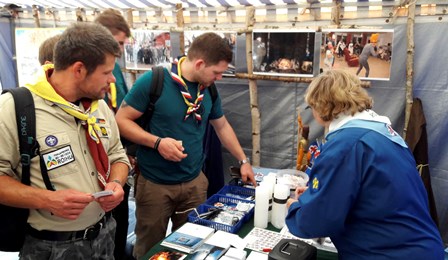 Roihu 2016 was the name of the 7th International Finnjamboree organised by the Guides and Scouts of Finland. It was the largest youth project of the year in Finland. Roihu (=campfire) was the culmination of 17,000 scouts' summer camp in the forest at Evo, Southern Finland.

The Fellowship of Scouts and Guides of Finland took part in the sub-camp Oasis at Roihu, which offered the possibility to leaders to come for a cup of coffee, to have a shower or visit a warm sauna. They could also talk with some experienced leaders, enjoy singing or just have a nap.

The Fellowship had a tent where ISGF and Finish Fellowship products were sold. They promoted the Peace Light from Bethlehem and the Stamp Bank. The participants had been informed that they could bring stamps to the tent and thus through the Stamp Bank help WOSM and WAGGGS Scout and Guide projects around the World. The goal was to make the Fellowship more visible and to recruit new members. Leaflets were distributed on how to start a Guild and the ISGF leaflet. There were lots of things happening for different age groups, workshops, hikes and campfires, as well as an evening programme and in a smaller scale – sub-camps and camp groups had their own evenings in addition to some International evening programme.

At Roihu there was a sub-camp for families, and all adults participated in the camp duties. This was the place that gathered children and parents together from each one of Roihu’s sub-camps. Whenever you heard excited laughter, you knew that the children were not far! For handicapped scouts, who need extra support, the activities were roughly the same as the activities of other scouts and age groups. There were many religions and ideologies presented! It was a chance for everyone to learn about our differences while embracing one's own spirituality.

The Finnish Fellowship was very pleased with the interest shown by 32 contacts, many of them wishing to establish a new Guild and/or become a member of our Fellowship.