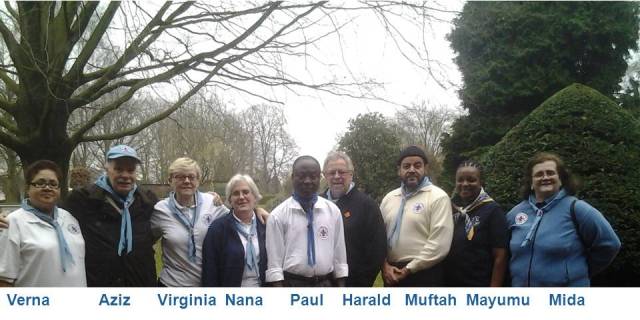 From the 5th to the 12th March 2013, the members of the World Committee gathered at the World Bureau for their annual meeting and several other specific appointments.

All the committee members were present as well as Wamuyu Mahinda, WAGGGS representative.   Leny Doelman, Central Branch & Twinning Coordinator and Anthony Florizoone, Treasurer, were partly present. The representative of WOSM, Simon Khoo, could not attend.

The agenda included the interview and appointment of the new Secretary General, the General Assembly of the International Ambassadors Guild, a Finance meeting, information on UNESCO, preparation of future events such as 4th African Gathering, World Conference in 2014 Sydney – Australia and ISGF 60th Anniversary on 25th October 2013.

The implementation of the Action Plan 2011 – 2014 was the main part of the agenda and so the participation in Gatherings and Conferences, the finalization of “ISGF – Our Kit”, the profiles of the Regions, Sub-Regions and NSGFs was debated.

The Web, the restructuration of the Stamp Bank, the launching of the Photo Bank at the World Bureau and the Shop were also discussed.

The World Committee had many days of really hard work full of snow and friendship that included the invitation by the Belgian Federation for dinner and the visit to the World Bureau of the Chairman of one of the Fellowships from Malaysia.