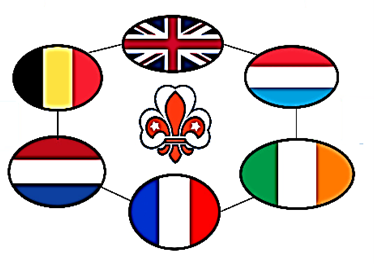 Sunday, 11 September 2022, a Zoom meeting was held for the members of the Western Europe sub-region (WESR). In 2022 there was no sub-regional gathering because of unforeseen circumstances. The BP Guild of United Kingdom took the lead to organize an online meeting for the members. Before the session was opened we took a moment of silence for Queen Elizabeth II who died on 8 September.

Meeting for NP and IS
Thirty-three (33) members showed up and first there was a separate meeting for the National Presidents and International Secretaries of the countries Belgium, France, Ireland, Luxembourg, Netherlands and United Kingdom. They discussed the new representative for WESR and the host country for next WESR Gathering.
Representative for WESR
A new representative was needed from the WESR in the Europe Region Committee as Pierre Decoene from Belgium will finish his term of office after the Europe Conference in 2023. Happily Sue Page from the UK stepped forward to take office in the next Europe Region Committee.
Bid for WESR Gathering 2025:
Also they discussed if there were bids for the 29th WESR Gathering in 2025. It was the Netherlands who offered themselves as the next host country. In case something happens UK offered again to hold an online meeting.
Reflection:
A presentation from UK about the environment and how we could reduce the plastic soup etc. Also statements about animal conservation and World Wildlife Fund. The presentation ended with a quote from the famous biologist David Attenborough.
Speech chairman ISGF World Committee:
Elin Richards, Chairman of ISGF World Committee, held a speech in which she emphasized that information about ISGF should reach all levels in the National Scout and Guide Fellowships so that next year we all know who we are, what we do and what we have offer for others. We need to remember the values that made us a member of ISGF that we have become today. Living them brought not only professional success, but personal success as well.
Presentations WESR countries: The Dutch Scout and Guide Fellowship showed a presentation about their Good Turns for the community and Scouting. Their members also attended Conferences in other Regions and Sub-Regions.
Information Europe Region Conference:
Birthe Ømark, host committee Europe Conference 2023, informed and explained all information concerning the next Conference which will take in Ranum in Denmark. Registrations are coming in and participation costs need to be paid via a credit card after having received an email from the host committee. All information can be found on ISGF website via this link and/or via the direct link to the host committee.
Closure of the meeting:
No further questions were directed so Pierre Decoene closed the meeting and thanked the participants with their attendance.