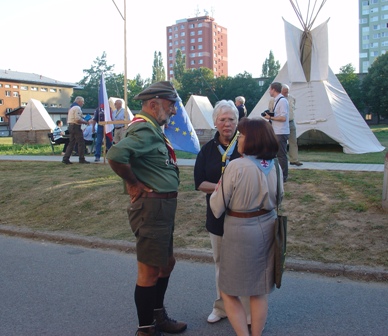 From 15-19 August 2012 eighty six (86) participants from 15 different countries gathered in Pilsen, Czech Republic, for the 7th Conference of the sub-region Central Europe (SRZE). Also a group of former Scouts and Guides from Afghanistan but living many years in Germany and in Strasbourg (France) joined this Conference.

The host, the Czech Scout and Guide Fellowship, a section of the Czech Scouting/Guiding Association Junák, did a wonderful job. The venue and accommodation was in a boarding school of the Skoda factories and despite the heat wave that week the building was remarkable cool. The Czech had made an exhibition of some typical tents that are used in this country such as a tee-pee and the so-called "Podsada", a tent which is built on a wood base. A special postal stamp of this Conference had been produced as well as a postcard. Despite Scouting in Czech Republic had a number of ups and down, they celebrated in 2012 their first 100 years.

The active Scouting of Czech Republic had been involved in the opening ceremony where also the young mayor of Pilsen and a representative of Czech Scouting were present.

A folkloristic group from a nearby city Straconice brought us music from the country while performing on their violins, bagpipe and flute. The performance, later in the week, of a local young Guild choir called “Cantuta” from the capital city of Czech Republic (Prague), was outstanding. Their voices, their repertory and their enthusiasm were overwhelming.

Participants enjoyed the opportunity to meet and learn from each other, discussing, clarifying and codifying their common goals and disparate experiences, acknowledging the obstacles to success. Especially for countries like Estonia and Hungary whose census is becoming lower than when they started and they will get assistance from neighboring National Scout and Guide Fellowships (NSGFs).

During this Conference a new Treasurer has been elected to join the SRZE, who exists 20 years now. The next Central Europe workshop will be held in Berlin in March 2013. News from World Committee as well as Twinning in this sub-region and also the use of the ISGF website was explained.

Pilsen was founded in 1295 and a visit to the St. Bartholomew’s Cathedral was on the programme. The city has the title of European Capital of Culture in 2015. Pilsen is also known as the Czech beer capital so of course a visit to the world famous Pilsner Urquell brewery (since 1842) was included. Excursions were made to famous Czech spa cities like Carlsbad and/or Marienbad in combination with a visit to the famous monastery Teplá.

The 8th Central Europe sub-region Conference will be held from 23-27 September 2015 in Zeillern in district Amstetten, Austria.