MED 2018, First get together of volunteers in Athens

The 1st get together of the volunteers, that will support the organization of the “16th Mediterranean meeting and the 5th South-European Meeting of the International Scout and Guide Fellowship,” that will be organized in Athens, from the 19th until the 24th of October 2018, took place on Monday 6th of February 2017, at the Headquarters of the Greek Scouts. The meeting was called by the “Organizing Committee of the 16th Mediterranean Meeting”. The Organizing Committee was formed by the Joint Committee of Former Scouts and Guides (ΕΣΠΠΟΕ) that will be responsible for this international event. 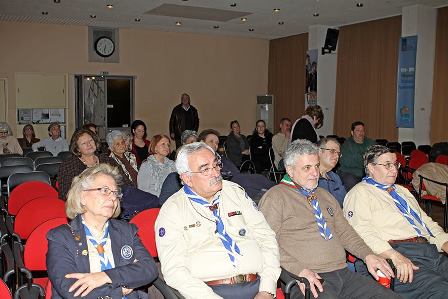 The volunteers, mostly members of JCFSG (EΣΠΠΟΕ) but also friends, had the opportunity to be informed about the program of the event and also the needs of such a meeting. The knowledge of a foreign language - of the ones that are mainly spoken in the countries of the Mediterranean (French, Italian, Spanish, Arabic, English) - as well as knowledge of computers, familiarization with the social media, music, dancing, handcraft, gastronomy, love for the nature and the sea, and other dexterities and hobbies will be very useful. Based on the preliminary program and the “Work Groups” that have been formulated, the volunteers expressed their preferences for the sections they will like to assist. There is work for everybody, both during the preparations as well as during the actual meeting.

There was a big enthusiasm for this new challenge to organize this meeting, reminding all of us – ten years later – the successful Scout & Guide Spirit Flame Project 2007.

This is yet another opportunity for Scouts and Guides to work together for a common cause that will bring joy to members of the ISGF from the Mediterranean and Europe as well as other parts of the World. In their own way they will give our guests the opportunity to learn more about our country, our cultural heritage and our Scout and Guide Spirit.

I would kindly ask you to have more information about the event ! Thank you ,
Reply
# Vice Chairman ISGF World Committee — Nana gentimi 2017-03-01 09:07
A Med adventure is on its way!
We expect you to share with us a Sea Odyssee full of friendship, activities and fun !!!!
Reply
# Member of NSGF Australia — Patsy Hughes 2017-04-22 09:42
Such an exciting project, Nana. My greetings to your committee and I hope you have a fun time together planning, and lots of ideas flowing! Best wishes,
Reply
# Committee member Europe Region for sub-region South Europe — Ana Rodrigues 2017-02-23 18:33
Good luck for this new "activity"! Let me know if I can help.
Reply
# International Secretary NSGF Denmark — Anne Haastrup-Nielsen 2017-02-22 11:07
Looking forward to joining your Sea Odyssey in 2018 and hoping that you will have a fair wind for your preparations!
Reply
# National President NSGF Italy — Sonia Mondin 2017-02-21 23:42
In the FRATERNITY' s day we send our best wishes for a great 2018 MED
Sonia Mondin President MASCI
Luigi Cioffi MASCI national secretary
Anna Maria Volpe Prignano International MASCI Secretary
Reply
# National President NSGF Cyprus — Christos Kouzis 2017-02-21 18:20
Reading your article, I would like to send to all of you my best wishes in achieving your goal.!!!
Reply
Refresh comments list
RSS feed for comments to this post
Add comment
JComments
FaLang translation system by Faboba