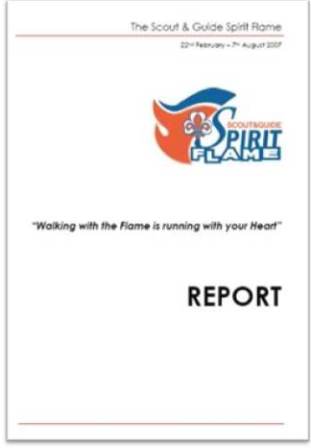 The Flame in a nutshell

The figures
The Flame travelled for a total of about 8,200 km overland (more than half of it in the four non-European countries) and 1,200 nautical miles on sea. It called on 97 cities, towns and localities in nine countries (plus Monaco). It involved an estimated 5,500 runners/bike riders (plus a few hundreds on camels, donkey carts etc.). It required the efforts of about 4,000 organisers. It was watched along the route and at the ceremonies, and visited at the Jamboree, by an estimated 1.2 million people.

The effects of the Flame 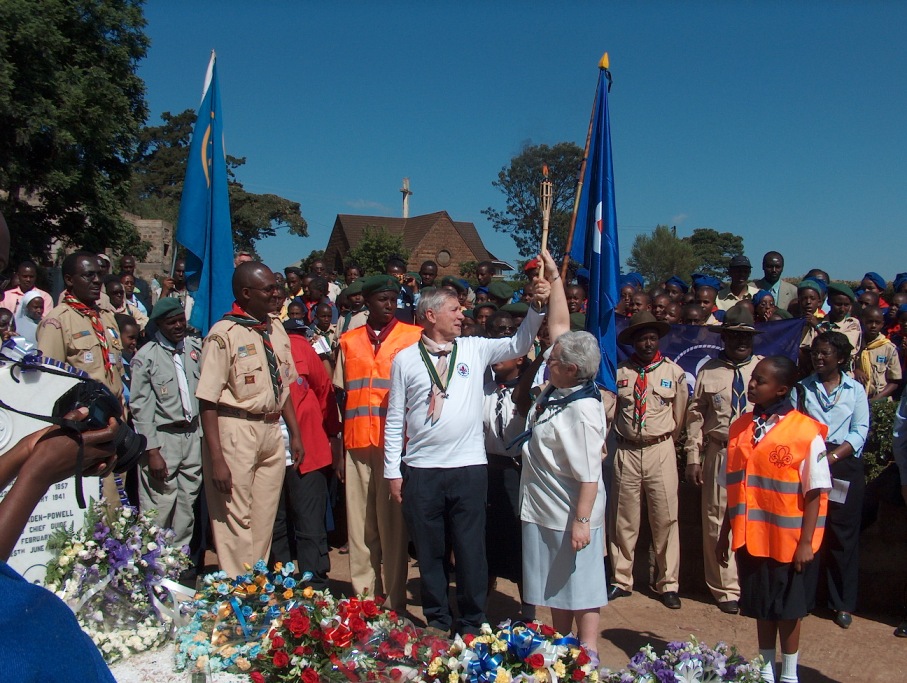 Kenya
As Kenyans we were proud of organising the start of the Flame. The Lighting Ceremony in Nyeri was solemn: a procession preceded by the ISGF flag followed by the band went from B.-P.'s last home, Paxtu, to Nyeri's Cemetery, where the Flame was lighted on the Founder's grave.
As a key symbol of the Movement, the Flame was disputed between the Kenya Boy Scout Association and the Kenya Girl Guide Association. The Scouts had it attend the great annual Thinking Day Festival in Nyery. Thereafter the Flame took place in a Guide Thinking Day in Nairobi's Anglican Cathedral and in the Inauguration Ceremony of the WAGGGS Africa Region Committee meeting. The two associations shared the hardships and difficulties of taking the Flame overland to the Moyale border post with Ethiopia.
In all these occasions the Flame lit on the Founder's grave was a powerful reminder with our country's authorities and the general public of the figure of the Founder and of the values of the Movement he founded. 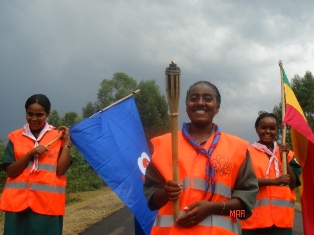 Ethiopia
Ethiopia is thankful for the chance to relay the Scout and Guide Spirit Flame. This gave many of the Ethiopian Scouts a chance to look back at the history of their Movement. Many of us has the chance to know that Scouting was first founded, with its own special Scout school, in 1932 and was active in training Scouts in educational, physical and some international languages such as French and English in addition to the Scout training at the school. We also had the chance to know that in 1936, when Ethiopia was invaded by fascist Italy, the students and Scouts in the Scout School were the nucleus of the Black Lion Contingent of the Ethiopian Army.
But above all, it has invigorated the Movement's presence among the Ethiopian populace and encouraged request for training of young boys and girls all over the country. Local civic organizations, non-governmental organizations and UN agencies are beginning to request the Scouts to take part in some activities, and the Ethiopian Scout Association has received financial assistance from Initiative Africa [ a local NGO] to train Scouts in four National Regional States. In addition the World Food Programme's hunger walk and Unicef's great run were conducted in 2007 and 2008.
The relay of the Flame has given our Movement a very important media coverage and has helped us to check where we stand.
Gebreselasie Esayas Dagnew, Deputy International Commissioner 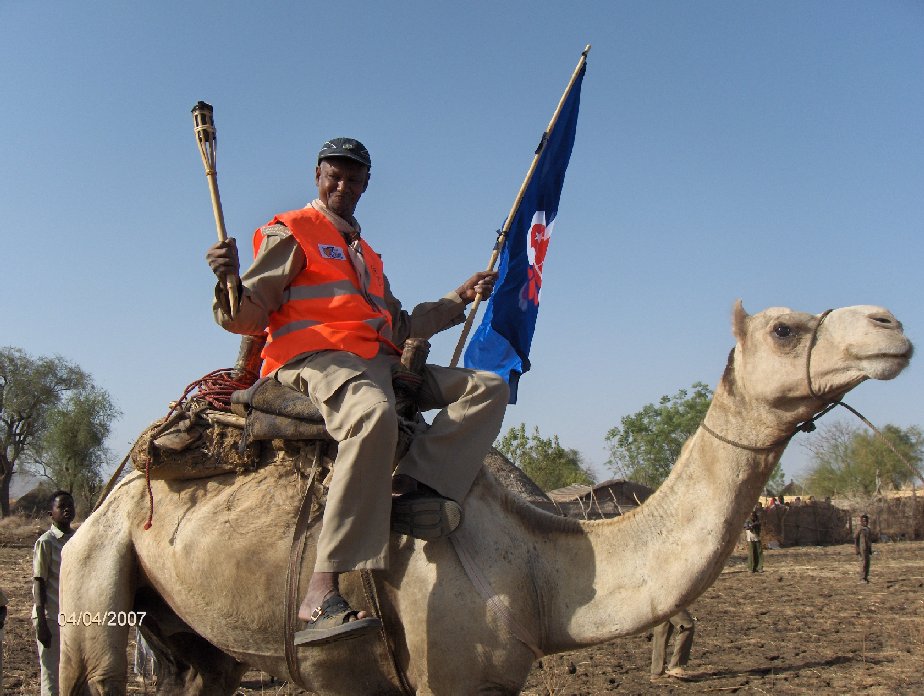 Sudan
The Flame was a great opportunity for Sudan Boy Scouts and Sudan Girl Guides. The Flame triggered an atmosphere of hope, enthusiasm and friendship. To prepare the longest route in Africa, to work with 6 states for receiving the Flame was an enjoyable experience. The Flame passed through the states of Kasala, Gedarif, Gezira, Khartoum, River Nile and Northern state where Scouts and Guides waited and celebrated.
The event was a landmark for Scouts and Guides where 6 different state Governments, civil society, UN agencies and citizens worked closely and helped in receiving the Flame. The occasion opened avenues for communication with states, cooperation between Scouts and Guides and media coverage like never before. Scouts and Guides got the attention for the whole period of the passage of the Flame: they are known better. The media coverage helped as many as 120 Scouts and Guides from Sudan to attend the Jamboree at London. During the Flame, both Scouts and Guides reflected on their performance, focussed on their mission, and adhered to their Promise and Law. It was a time when they felt proud to be communicating with a small world that shares with them values and commitment of helping others, they witnessed this communication in person. The Sudan Boy Scouts and Sudan Girl Guides benefited the most of the Flame. Sudan Girl Guides received two French Guides who came as follow up on the Spirit Flame: such a direct contact with European Guides had not happened for a long time. Sudan Girl Guides are celebrating their 80th anniversary (1928-2008) on November 15th, 2008, and the spirit of the Flame is all over.
Dr. Sumaia Abukashawa, Commissioner, Sudan GGA 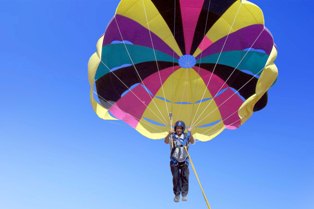 Egypt
The Flame in Egypt was under the patronage of the First Lady Mrs. Suzanne Mubarak, president and founder of the Suzanne Mubarak Women's International Peace Movement. This gave a big impulse to the Flame operation during its passage through Egypt, and consequently there have been many activities about peace in cooperation with the Peace Movement.
The operation itself was a big opportunity for gatherings not only of young Scouts and leaders but of others, including the governors of the 16 governorates crossed by the Flame and other high officials. That made the public aware of the Scouting movement in Egypt and how it could change young men and women to be honourable, loyal, useful and helpful to others, promising to do their duty to God and their country. It also made officials pay attention to the Movement because of its positive effect for society.
The Flame gave Egyptian Scouts and Guides the opportunity to share in the celebration of the Centenary of World Scouting and to feel that they are a part of world Scouting which stands for peace among peoples and considers other Scouts as brothers.
The media started to give more attention to Scouting activities and celebrations and to present them in a favourable light.
AVM Ahmed Abdel Latif, President, Egyptian Federation for Scouts and Girl Guides 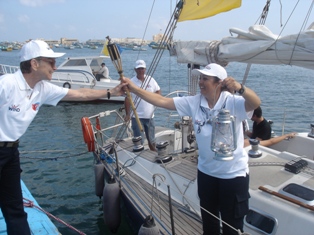 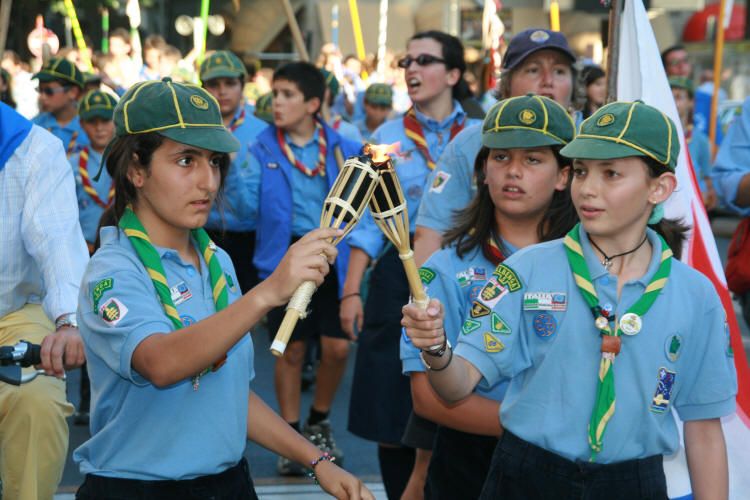 Italy
The Flame in Italy was a great success. It received an overwhelming welcome everywhere. It acted as a revealer of the Scout heritage existing in the country, with many actors, from Carabinieri to Prefects to road police, openly declaring their past Scout membership. It provoked important speeches: His Holiness Benedict XVI mentioned the Flame in his Sunday address in St. Peters Square, and prominent authorities took the floor at the solemn ceremony held at Rome's Capitol. As many as 157 Scout Groups (Agesci, Cngei and Fse) were contacted and involved. From Italy, branch Flames went to the Mont Blanc, to Slovenia and Austria (Graz). The emotional involvement was such that now, whenever there is a Scout event dedicated to the Centenary, the Flame is mentioned first, and the role of the adult Fellowship is recognised as an active one, not merely as a "veteran" association. Thanks also to the Flame project, the membership of the Italian adult Scout/Guide Fellowship MASCI for the first time exceeded 6,000 in 2008.
Alberto Albertini, National Secretary, MASCI 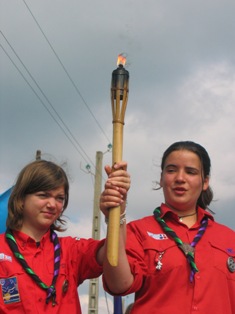 France
This operation, which still echoes vividly in everyone's memory, had a resounding success throughout the world and more particularly in France. The credit goes to all those who conceived and conducted it, ensuring its total success and succeeding in overcoming all difficulties.
It enabled many young Scouts and Guides to discover that Adult Scouts were also able to initiate and carry out such large-scale projects.
The fallout of this worldwide event is positive both for the young and the Adult Scouts. The "Amitiés de France - Anciens Scouts et Guides" have recruited more that 40 new members following this memorable enterprise.
Jeanne Séraphin 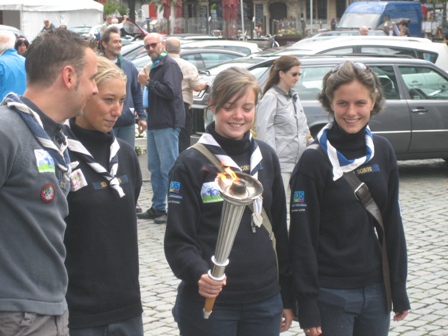 Belgium
Our three Adult associations - substantially different from each other - supported the Flame project with enthusiasm and co-operated in a very positive spirit, overcoming any tension arising from differences of personalities.
Juvenile Scouting was not able to give sufficient support, except at local level, owing to the coincidence of the Flame operation with a huge Belgian Centenary project. Nevertheless, thanks to the media, the Flame did increase the visibility of all our associations with the general public as it went through our 12 townships and localities. The three associations saw their membership increase, one of them by as much as 14%.
The DVD on the Flame is still shown in meetings and activities and is having a very positive post-Flame impact.
As to the meeting with the European Commission, though it did not have any special impact on the media, it enabled ISGF to start some useful contacts between the European institutions and its Europe Region.
Anne Dupont, World Committee member 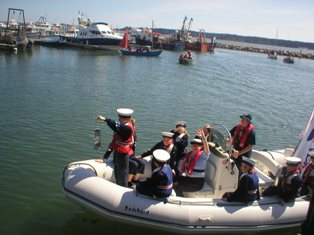 United Kingdom
The challenging project of bringing the ‘Spirit Flame' from B.-P.'s final resting place in Kenya to the birth place of Scouting, Brownsea Island UK, and on to the World Jamboree in July 2007 provided a wonderful opportunity for young people in Scouting and Guiding to work together. The feedback from these young people is that it was a great and amazing experience. The project helped to raise the profile of Scouting and Guiding with town and city authorities and the general public in the southern counties of England. The turnout of many civic dignitaries and the attention received in the press and on TV was most impressive and significant.
It brought the ISGF to the attention of many people, promoted good relations between UK ASA and the Trefoil Guild and helped to establish a good relationship between UK ASA and the UK Scout Association.
Most of all it was real ‘Fun' for the people who took part. It was in the ‘True Spirit of Scouting' and 100 years on, it is certain that BP would have been truly pleased.
Allan Page, National President UK Adult Scout Alliance 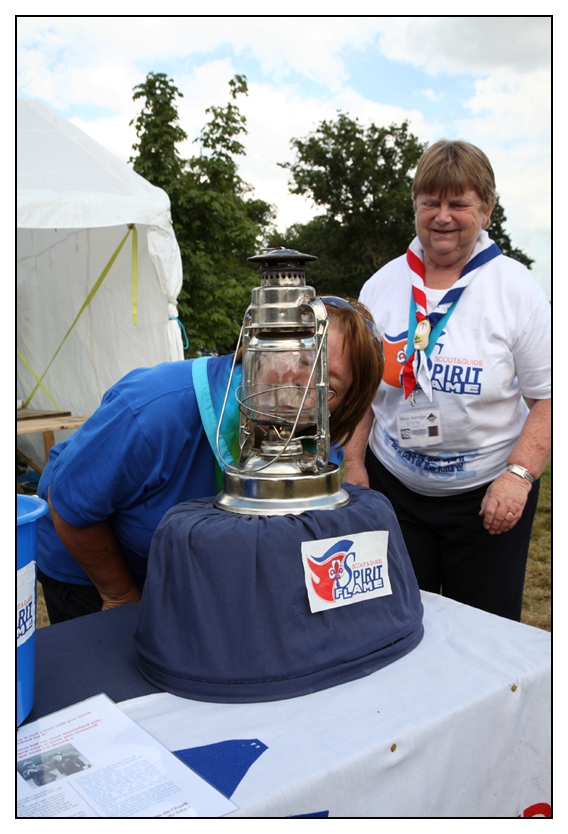