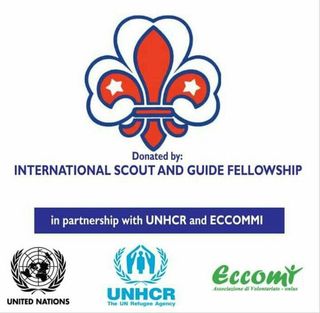 To all ISGF members,

On behalf of ISGF World Committee and World Bureau, I would like to thank you for your donations and support on the IMVEPI Shelter Project in Uganda. Your generous contribution in this project has helped to achieve our goal : to built 50 huts for the refugees in the IMVEPI settlement. Your support has made a significant contribution to the success of this ISGF Global Project. Your support is invaluable to us, thank you again. I also would like to thank Mathius Lukwago, former Chairman, for the time and energy devoted to this project.

With deepest gratitude and warmest wishes.

Martine Levy, ISGF UNHCR representative, proposed to write a few words as she initiated the project in 2017. I let her close the chapter of one of the ISGF global projects.

An article on ISGF activity in Uganda, in partnership with UNHCR, has just been posted on the ISGF website. This article tells the story, which lasted 3 years, of ISGF at the IMVEPI refugee settlement in Uganda; this settlement which received thousands and thousands of South Sudanese refugees fleeing their country (war, climate, famine) and, as the translation progressed, my feelings were very mixed.
A certain satisfaction to have launched, as the official representative of ISGF to the UNHCR, this project in 2017 on the proposal of the Representative of the UNHCR in Paris, to have worked in July 2017 on a document which could be presented at the World Conference in Bali, Indonesia, to have seen delegates vote for the continuation of the project.
Many thanks to the representatives of ISGF and UNHCR in Uganda who were able to carry out this project in collaboration with the administration of IMVEPI settlement.
It is a great pride to represent a World Organization whose members are so generous.
The target was 25,000 euros; it was exceeded by 3% and the sum of 25,803 euros was reached.
But it is not just a question of money; it goes far beyond; listen and understand the suffering of others. I also give thanks to the NSGF UK, some members of which have gone to show to the "ISGF village" of IMVEPI that in ISGF are people concerned with the well-being of others. I would have so much loved to be on this trip!!
And finally, a certain sadness; indeed, I knew that the operation should end one day, or another and this day arrived. We must deal with it although many people are left behind.
But the important thing is that, thanks to the members of ISGF, around fifty huts have been built for around 200 people who can live with their families, cultivate their plot of land, in short live.