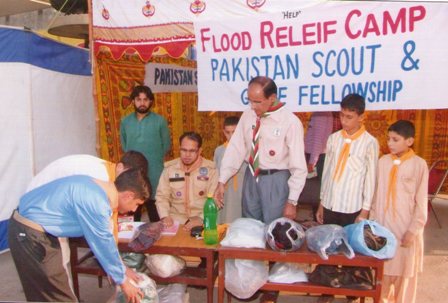 The 2010 Pakistan floods began in late July 2010 and faced a big disaster in the country. Approximately one-fifth of Pakistan's total land area was under flooded. The floods affected about 20 million people, mostly by destruction of property, livelihood and infrastructure, with a death toll of close to 2,000. People became homeless and were involved in different miserable disease.

The Pakistan Scout and Guide Fellowship set up many Flood Relief Camps in the major affected areas of the country together with the Pakistan Boy Scouts Association. 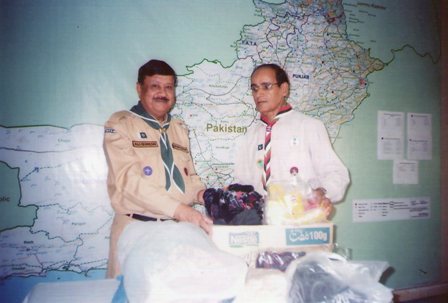 The Fellowship members organized those camps with the help of other Scouts and collected blankets, sweaters and warm clothing. Also food items like rice, grains, flour (the main ingredient of Pakistan bread) and tea were donated by the common people.

The National Scout organization appreciated the work of the Fellowship very much and they were very impressed of their support to the community. They did the relief work with their available means. They worked day and night for the welfare and aid of the affected people. Also some collected material was sent for distribution to camps where flood victims stayed under the supervision of the army.