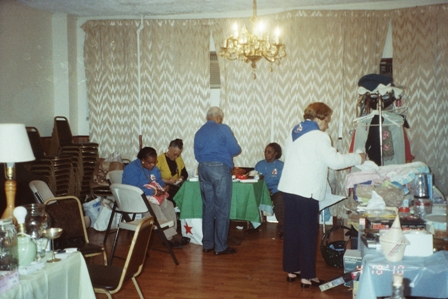 An earthquake devastated country Haiti on Tuesday, January 12, 2010.  CASEGHA reacted that same week by calling a special Board meeting on the 16th of January, and an extraordinary general meeting took place on Saturday 24.

Note of the editor: CASEGHA (Association des Anciens Scouts et Guides d’Haiti)  is a group of 100 enthusiastic adults from Haiti but living in the state of New York, USA. They are members of ISGF via Central Branch.

It was decided to have a fundraising among all members, and we planned another fundraising and a big patriotic rally in February on the occasion of our 35th anniversary and Thinking Day instead of a special feast which was postponed.  From our meetings in January, the money collected has been donated to:

Two of them founded by some of CASEGHA members, the last one by Father Jean-Claude Lespinasse killed in the earthquake.

On March 20, CASEGHA had a special day of prayers followed by a mass in the intention of all people (especially Father Lespinasse, and the Scouts and Guides of Haiti) who died in the terrible tremor.

The flea market organized on April 17 and 18 was a success. On Sunday, April 18, the President of the National Association of Boy Scouts of Haiti visited us. The profit will enable us to send goods to the Scouts of Haiti (clothes, shoes, school supplies etc) at the end of May.  We have put in our calendar another flea market some time during the month of July.

The job has not been finished; we will continue to support Haiti through the Scouts and Guides throughout the year.

CASEGHA appreciates the quick response and the solidarity of the ISGF via their International Project Team and the Scouts and Guides all over the world who did a tremendous job by giving a big hand to Haiti through the Red Cross, Catholic Charities, and so on.

# National President Fellowship Copernicia, Curacao — verna lopez 2010-06-29 11:13
We of Copernicia wish you strength to deal with this catastrofe on your Island. Keep up the good job and God Bless you all. Our prayers are with you.
Reply
Refresh comments list
RSS feed for comments to this post
Add comment
JComments
FaLang translation system by Faboba