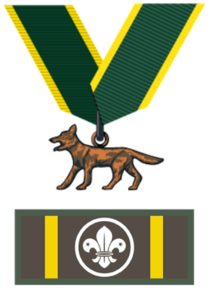 The Bronze Wolf Award is given by the WOSM World Scout Committee to acknowledge "outstanding service by an individual to the World Scout Movement".

It is the highest honor that can be given to a volunteer Scout leader in the world and it is the only award given by the WOSM World Scout Committee.

During the recent 41st World Scout Conference in Baku, Azerbaijan, Reiko Suzuki from Japan, Wahid Labidi from Tunisia and Shree Ram Lamichhane from Nepal who are also member of ISGF, were decorated for their activities for the World Scout Movement.

Reiko received the award from her husband Toby Suzuki who is also ISGF member and who received the decoration in 2007. After Lord and Lady Baden Powell they are the second couple that had received both the Bronze Wolf award.