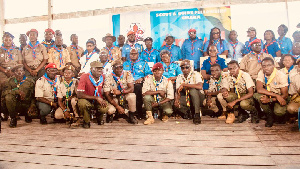 The National President of the Scout and Guide Fellowship Ghana (SGF Ghana) Mr. Prosper Bani has reiterated the need for the government and its development partners to remain mindful of the increasing effects of climate change and its effects on livelihoods. According to him, through effects were being made globally to mitigate the impact of climate change, more needed to be done to salvage the situation.

Speaking at their annual general meeting on 27 July 2022 of the SGF Ghana held in Accra over the weekend, Mr. Bani also underscored the need for members of the public to play their role in combating climate change by ensuring their activities do not worsen the situation. Explaining, he said human activities such as deforestation and indiscriminate burning among others, where contributory factors to climate change.

“We have seen the desertification of our savanna lands and severe drought in parts of Africa, the impact of floods in our cities and the destruction of infrastructure and agriculture lands, all these threaten our existence on earth”.

Mr. Bani who is a former chief of staff and Minister of Interior further called on NGO’s and corporate institutions to collaborate with SGF Ghana and all other scouts and guide movements to populate their communities with trees to stop the encroaching of the Sahara Desert onto the Greenfields. Giving a brief of SGF Ghana, he noted that the International Scout and Guide Fellowship (ISGF) consists of 75 National Scout and Guide Fellowships in Arab, Asia Pacific, Western Hemisphere, Africa and Europe regions with its headquarters located in Brussels, Belgium.

He commended the executives and members of the group for their contribution to the progress of the group, adding that the Fellowship had survived because of their commitment and the support received from their members.

The Africa region chairperson of the Africa Committee, Iddrisu Hassan, in his address indicated that every scout and guide must be involved in community service and share their experience to inspire others. He also advised members of the Fellowship to get involved in pertinent issues affecting communities “if we are to live by our brand images of creating a better world”.

Deputy Chief Fellow to the president of SGF Ghana, Mr Mette Nunoo, in his remarks urged members of the Fellowship to demonstrate discipline in all their actions, adding that it was also very important for them to preach against all forms of corruption.