Interaction of ISGF members in Nepal 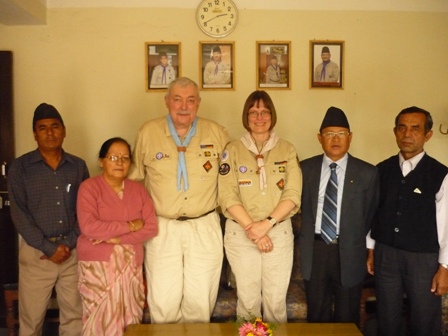 While on a tour through Nepal, the German couple Angela Ströter and Reinhard Osterfeld took the chance to get in touch with the Central Branch (CB) group in Nepal on 14 March 2013. Both are members of the local German Fellowship Cosmas and Damian in the city of Essen.

In Nepal is an existing CB group of 15 members. They were welcomed in the Scouts National Headquarters of Nepal in Kathmundu by the contact person Shree Ram Lamichane who is also the Chief Commissioner of Nepal Scouting. They discussed the role of the adult members and the various aspects of Nepal Scouts. Usually scouts or girl scouts meet at school and they are mostly concentrated in the big cities and districts because of

Most of the adult Scouts in Nepal run a unit or organize training (from basic to woodbadge training as well as assistant- and leader training). The adult Scouts were pretty much occupied with the organization of the coming National Jamboree that will take place 150 kilometers west of Kathmandu in Tikauli from 10-15 April 2013. One of the topics will be mountain climbing as Nepal is the only country in the world having a Baden Powell Scout Peak at the height of 5.890 meters named in 2006.

ISGF members do not run a unit but support a unit by special activities or contribute financially.