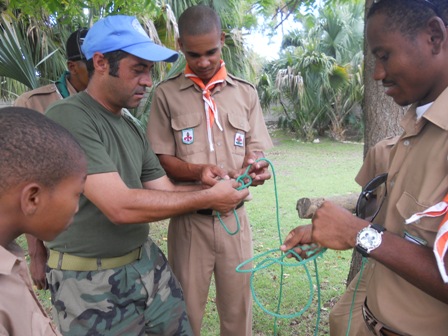 Ariel Dos Santos, member of a local Central Branch Guild in Uruguay had a chance to meet some local Haitian scouts while he was on a mission in April 2011 with URUMAR (National Navy of Uruguay).

Getting in contact with the population and the scouts of the area is also part of the activities of URUMAR. So Ariel asked ISGF how he could get in touch with the Haitian Scouts. In the harbor of Port Salut, at the Marine base of URUMAR, he met a group of local scouts. Ariel already translated some Scout manuals from Spanish into Creole, the language spoken in Haiti.

The scouts watched a film about the scout history and shared practicing some knots and other diverse cultural activities. It was a remarkable significance and an emotional farewell for the unforgettable time the scouts spent with them. As Scouting is a worldwide brotherhood, there was not a single moment to feel themselves like strangers. All the crew members had the opportunity to share their expertise with the scouts which was highly appreciated.