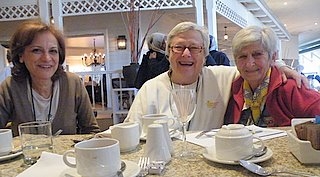 Doreen Haddow, National President of Trefoil Girl Guides Association of South Africa (right), met our chairman, Martine Lévy, and General Secretary, Faouzia Kchouk (left) while attending the WAGGGS World Conference in Johannesburg, South Africa in July 2008. She has given her helping hand to this Conference. The three of them discussed the prospects for further development of South Africa for ISGF. Doreen is also our contact person of a group of Central Branch members. She is very eager to recruit more members and to encourage the Trefoil Guilders as well as past members of Guiding to join ISGF.