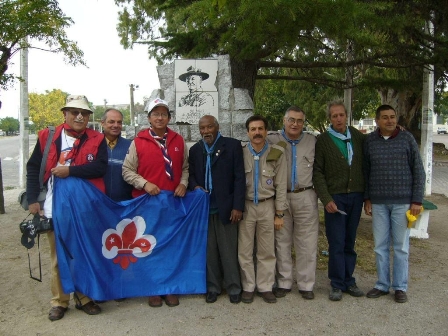 Juan Salazar, candidate for next World Committee visited Uruguay on a mission as liaison person for Central Branch in order to inform an enthusiast group of former Scouts and Guides.

In December 2007 this group of former Scouts and Guides was constituted in the city of Montevideo, Uruguay. In 2008 inquiries were made in order to incorporate themselves to the International Scout and Guide Fellowship (ISGF).

Leny Doelman, Central Branch Coordinator, provided them with an information kit and she asked Juan Salazar, member of the National Scout and Guide Fellowship in Chile, to assist her to do the follow-up. Juan offered to visit them to inform them about the requirements, benefits and significance in order to become member of ISGF.

A visit was arranged between the 9th and the 14th of April where various meetings and activities took place in Montevideo where, on the 10th a press conference was held to expose FASGU as a Central Branch unit in Uruguay. Also a meeting was arranged in the city of Juan Lacaze with the idea of given an impulse to the many adults interested and to organize a group in that city regarding the numerous contingent of adults who are in an organized group of Former Scouts since long time.
Juan was accompanied by Fernando Villalobos, also member of a Chilean guild as a way to demonstrate how really a National Scout and Fellowship works, how natural Scout Spirit is and to support them in the beginning of their adventure. Exchange of experiences started, questions were answered and the way of being organized and how they could be linked to ISGF. They were informed from all aspects related to the structure of ISGF.

After that meeting they moved to the city of Juan Lacaze, two hours away from Montevideo, and end up in a meeting with a scout group of this town. In the opportunity they participated at the closing ceremony of their day activities with all children, boy and girls of that scout group. At the occasion they repeated the previous day conference at Montevideo with enthusiast participants to join FASGU as a guild. It is necessary to remark the enthusiasm of people that attended the meeting and they hope the motivation has been sufficiently strong to make them think to incorporate soon to FASGU. In Juan Lacaze city they visited a small square honouring Lord Baden Powell

Considering the idiosyncrasy of each country, each nationality, It can be concluded that the form how Uruguay has faced its organization, starting from a big group with many aspirations and big achievements, they are on the right track to a proper path and briefly they will consolidate its National organization, attached to the principles of ISGF and its structure and statutes. They have a great sense of unity and identification with scouting. Disciplined, methodical and very inspired. Their great scout spirit is strongly noticeable and its preparation is evident. Although it is certain they have advanced very quickly since they intended to make this group in December 2007, with a total members of 43 people in Montevideo only, and with a listing of many other interested individuals plus the group in Juan Lacaze city, they have understood that now that they already know more about the organization and the form of being linked internationally they will work to lay the foundation for a NSGF to last for the future.

# Niels Rosenbom 2008-05-27 10:01
Welcome in the family to Uruguay. And thanks to Juan for your excellent work.
Reply
Refresh comments list
RSS feed for comments to this post
Add comment
JComments
FaLang translation system by Faboba