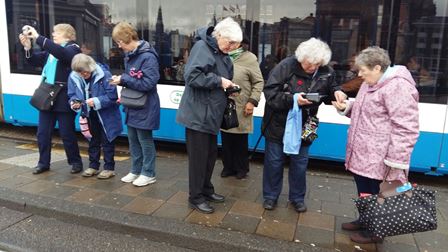 During the ISGF Europe Region Conference in 2016 the Twinning Coordinator received a request from a Trefoil Guild (TG) member of the Isle of Man, UK. A group of 6 wanted to meet some Guild members while they were touring and on transit in the Netherlands.

A Dutch Guild was approached and two of their members could meet the TG ladies in Amsterdam and have a chat with them. On 2 December they met at the Central Railway Station in Amsterdam and had lunch in this station. They found out that they have seen each other at several other occasions. It seemed that they both participated in the 26th World Conference in Como, Italy in 2011 and also at a sub-regional gathering in Cork, Ireland in 2012.

After lunch they took the tram to a famous street market, the Albert Cuyp, where they strolled around and bought some souvenirs. Despite the drizzly rain they had a very enjoyable afternoon. They exchanged souvenirs and badges.