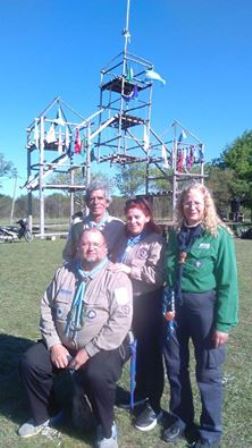 On 17 and 18 September 2016 more than 700 scouts from Argentina, Brazil and Uruguay participated, in the 6th EN.I.ESC (Encuentro de Integración Scout). The event took place in Las Canas, a 60-hectare park, on the banks of the Uruguay River near the city of Fray Bentos, Uruguay.

The young people participated in recreational activities and techniques through workshops, ropes course, water activities and adventure. In addition to these activities, visits were made to the Museo Uruguayo del Escultismo", opened in 2015 and also to the Museum of Industrial Revolution which is a National Historic Monument. Today this Museum, former meat processing plant and buildings, is a monument and visitors enjoy a glimpse in the past.
It was here in the Managers House, Casa Grande, where Baden Powell stayed during his trip to Uruguay, between 17 and 19 March 1909 and he signed the guest book.

This area is just southwest of the town of Fray Bentos. Its natural harbor gave birth to the town around 1859 on the cliff coast of the River. It was a major port for the region and led to the development of the city. Fray Bentos and Las Canas are ideal places offering unique indoor and outdoor activities. Close to the camp everyone could visit the historic city of Colonia del Sacramento, on the banks of the River Plate and recognized by UNESCO as a World Heritage Site. There was also time for visiting Montevideo.

Members from the Central Branch group Fraternidad de Antiguos Scouts y Guias del Uruguay (FASGU) joined this event and supported them in many ways. When the flags were raised also the FASGU flag was there.